So I am late in watching The Dark Knight Rises. Brilliant film.

What came up for me by watching this film was the meaning of fear. What behaviours and thought processes develop because of these fears? How is our fears conquered?

There is a part of the film (anyone who hasn’t seen it and doesn’t want to hear anything about it stop reading now) where a child is trapped in an underground jail and was the only person able to escape by climbing out. Many after tried but failed.

Many individuals tried to escape by wrapping a rope around their waist as a means of providing safety in case they fall. Bruce Wayne attempted this technique until it was suggested to try it like the child – without the rope

Bruce, (like most of us if we were in the same situation) believed by knowing and acknowledging the fear – dying in  the cave – would be enough motivation to find the strength to get out however the film demonstrated that It actually takes more than acceptance and acknowledgement.

That rope symbolised a safety net, a plan B. A safety net which holds us back and keeps us in that place of fear. When we have a rope (safety net) we do not have to really let go. The idea of having truly nothing left to lose is a powerful concept. This reminds me of the film Pursuit to Happiness starring Will Smith and his struggles/fears. When you are truly down and out with really nothing left to lose this feeling can be a positive factor to encourage that motivational drive.

The world we live in is consumed with how much we can do in a space of 24 hours.

Spending time with family and loved ones, Fitting in time for recreational activities to feel as though working to live and not living to work. Working hard to get to “the top” (what ever that means).

What are we chasing? Money? Status? When we get to the “top” will we be satisfied? In the words of the infamous rapper Notorious B.I.G “more money more problems” 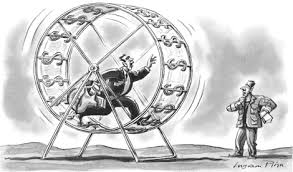 So what are we chasing…happiness? Inner fulfilment? What do these look like?

I believe that happiness is a state of mind. How many of say “if only…” “if only we had a car” “if only I can go on holiday once a year” “if only I made this decision rather than that decision”. The “if only” leads us to a place of self-doubt which robs us of seeing a situation for what it really is. A moment in time. A situation which can be appreciated as an experience whether good or bad.

Always feeling like something needs changing, I believe can be detrimental to our mental health so the question is how do we get out of this rat race.